Practical Training in Respect and Understanding 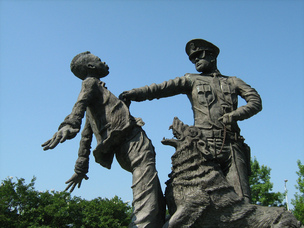 Responding to incidents of racial polarity and divisiveness, CORE instituted the “Civil Rights Boot Camp” to destroy ethnic stereotypes by exposure and sensitivity training in diversity.  Approximately 100 hours of education and community service are devoted to meaningful interaction with a broad cross selection of individuals and groups in the tri-state area. The program’s history has spanned a wide range of activities varying from manual labor on farms, interviews with Holocaust survivors and research programs in Harlem’s Schomburg Center.  Participants emerge from the program with a new respect and deeper understanding of their fellow man.

The idea for the Civil Rights Boot Camp originated in a 1995 incident in which five Greenwich, Connecticut, High School seniors -- Keith Dianis, Patrick Fox, Ed Oberbeck, Robert Texiere and Aaron Valenti -- went into deep seclusion after news broke that they had slipped a coded message of racial hate into the school yearbook.

Because of the coded message the students had planted in the yearbook -- "Kill all [African-Americans]" -- school officials had barred them from the graduation ceremony  So they went into hiding to avoid publicity. Reporters searched all over Greenwich for them, camping outside their homes, knocking on the doors of their neighbors and phoning their relatives. But the teen-agers were nowhere to be found.

CORE National Chairman, Mr. Roy Innis, phoned and then visited the Greenwich Schools Superintendent, John A. Whritner, and offered to give the students a summer course in racial relations and civil rights. Greenwich school officials jumped at the chance to turn the students over to Mr. Innis, calling it an opportunity for "redemption." In fact, school officials even agreed to allow the seniors to take their final exams and receive their diplomas once they completed the course.

Mr. Innis invited the teen-agers and their parents to join him at the Manhattan office of the Congress of Racial Equality for a frank discussion on race and diversity. The parents brought the teens, who were dressed in jeans, T-shirts and baseball caps. The visit got off to a good start after a private meeting between Mr. Innis and his guests. Angelique Wimbush, another CORE member, then led the families through the office, stopping to introduce them to the staff at various departments.

When they approached the conference room, the parents and teens saw that television crews, newspaper reporters and photographers had been invited, and dozens of them came. Suddenly it dawned on the Greenwich Five exactly how offensive their behavior had been to millions of Americans. At first they refused to be photographed, but soon realized that their graduation - and their whole future - depended on facing up to their responsibility. They stood with Mr. Innis for their photo.

Mr. Innis and George Holmes, CORE's executive director, then took parents and teens into a briefing on how the first Civil Rights Boot Camp would unfold. The students would visit New York City neighborhoods like Chinatown and Harlem. Mr. Innis told the parents that the emphasis would not be only on minorities, but on all disadvantaged and poor people who suffered under unreasoning prejudice. "We're going to take them to rural New York State so they can see poor white farmers." They'll also have to read books about black history and write essays on them.

Mr. Innis was so confident about his Boot Camp that he suggested it should be extended beyond the Greenwich Five as a "preemptive" measure. "One need not be a sinner to seek salvation," he said. His words were prophetic.
Find our Education featured page as a Las Vegas, NV Business in the Las Vegas Valley Directory.
Location: Las Vegas, NV, United States | Phone: (702) 637-7968