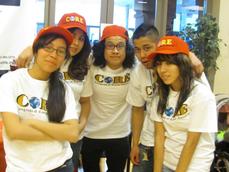 America 101:
One of the many failures of the United States’ current immigration policy is its inability to formerly assimilate the millions of immigrants currently living in the country. CORE has established a pilot center in Southern Nevada to address this challenge. CORE conducts a weekly class for LEGAL immigrants that are candidates to become American citizens. The classes are ESL (English as a Second Language) classes, American Civics 101 and personal responsibility. CORE gives our students the training needed to pass the citizenship exam by providing the logic and rationale behind the US Constitution, Bill of Rights and other critical documents that serve as our country’s intellectual foundation. CORE also promotes cultural assimilation by stressing the dangers of unlawful behavior, such as domestic violence. Finally, CORE communicates the responsibility potential and new citizens have to integrate into the mainstream of American society (i.e. Registering for the Selective Service).

America 101 for Americans:
Observers of CORE’s Join America Assimilation Center at work realized that the civics component of its curriculum would prove helpful for more than just immigrants alone. Sadly, American civics 101 and responsibilities of good citizenship are not being taught properly (if at all) in our public schools. Political Correctness and the dominance of Multiculturalism often distort or stifles said efforts. As a result, several charter schools in Nevada have asked CORE to expand its program into the public school arena.

CORE’s unique qualifications:
CORE has been operational for 70 years and is one of the country’s oldest civil rights organizations.
For decades, the Congress of Racial Equality has been engaged in the struggle both for the rights of immigrants, and promoting their integration into the American mainstream.
CORE’s long established record of assistance to the immigrant community and the organization’s successful involvement in creating the new policy led to its selection by the Department of Justice as a National Coordinating Agency (NCA). CORE shares this special designation with only eight (8) other nationally and internationally known organizations across the country and affords the organization an on-going role in developing regulations and procedures affecting immigration policy in America. CORE is also the only traditional civil rights organization with this designation.