CORE on an international level 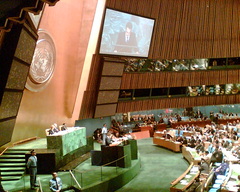 World Health Organization (WHO) on third world health related issues in particular those war-torn countries that are susceptible to outbreak of infectious diseases and the distribution of safe and effective vaccines.  CORE has been very engaged in the fight against AIDS and malaria in Africa.

High Commissioner for Refugees (UNHCR) on programs that protect and assist refugees as they return or resettle. This is particularly important in third world countries where populations are being displaced in those war-torncountries and desperately require resettlement, rehabilitation and reintegration into local communities.

United Nations World Food Program (UNWFP) and the fight against world hunger.  Of special concern is the nutrition and the distribution of quality food to those in displaced populations.