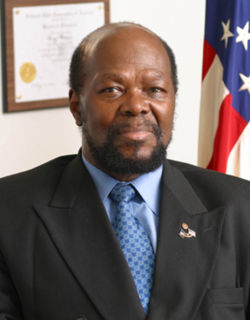 Roy Innis was born in St. Croix, U.S. Virgin Islands, the second of nine children. His father died when he was six years old, and at the age of twelve, his widowed mother moved the family  to Harlem. At the age of 16, young Innis raised his age and joined the Army.  By seventeen, he had attained the rank of sergeant.  Completing his tour of duty, Innis retired from the Army at the age of eighteen.  He had attended Stuyvesant High School, and upon returning to New York City, took a high school equivalent examination and began a four-year program in chemistry at  the City College of New York.  Upon leaving college, Innis worked for a number of years for various chemical companies and medical agencies, most notably Vick Chemical Company and Montefiore Hospital, where, as the sole researcher for an important cardiovascular research project, he achieved an important break-through in this area which resulted in the publicaton of a paper jointly authored by him and the head of the project.

Innis joined CORE’s Harlem Chapter in 1963. In 1964, he was elected Chairman of the Chapter’s Education Committee and became a forceful advocate of community-controlled education.  He led CORE’s fight for an independent Police Review Board to address cases of police brutality. In 1965, he was elected Chairman of Harlem CORE, after which he mounted a vigorous campaign for establishment of an independent Board of Education for Harlem. A proposition to this end was presented to the 1967 New York State Constitutional Convention.

In the spring of 1967, Innis was appointed the First Resident Fellow at the Metropolitan Applied Research Center (MARC), headed by Dr. Kenneth Clark.  In the summer of 1967, he was elected Second National Vice-Chairman of CORE. Also, in 1967, Innis and nine other black men formed the Harlem Commonwealth Council (HCC), an investment corporation whose long-term goal was to create independence and stability in Harlem. As the First Executive Director at HCC, Innis laid the ground work for what has become a highly successful model of economic development in a black community. During that same period, he was the Co-Editor and Founder of the Manhattan Tribune Newspaper.

Innis was elected National Director of CORE in 1968. That ame year, he drafted the Community Self-Determination Bill of 1968 and garnered bipartisan sponsorship of this bill by one-third of the Senate and over 50 Congressmen. This was the first time in U.S. history that a bill drafted by a black organization was introduced into Congress.

Responding to the continuing crisis of school integration, Innis offered an alternative plan consisting of community control of educational institutions. As part of this effort, in October of 1970, CORE filed amicus curiae brief with the U.S.Supreme Court in connection with Swann vs the Charlotte Mackleburg Board of Education. Seeking to enhance and to build on the black pride movement of the mid-60’s, Innis and a CORE delegation toured seven African countries in 1971. He met with several Heads of State, including Kenya’s Jomo Kenyatta, Tanzania’s Julius Nyerere and Liberia’s William Tolbert. In 1973, Innis became the first American to attend the Organization of African Unity (OAU)

in an official capacity.  In 1973 he participated in a televised debate with Nobel Physicist William Shockley on the topic of black genetic inferiority. In 1977, under Innis’ leadership, CORE rescued a South Bronx Catholic school that
was about to be closed. Working closely with teachers and parents, he established the CORE Community School with more than 400 students.

Roy Innis’ involvement in criminal justice matters spans his entire career in CORE.  Innis’ investigation in the early 80’s led to the uncovering of evidence that Wayne Williams was not solely responsible for the Atlanta Child Murders.  His defense of victims’ rights to defend themselves led to his support and involvement in highly publicized cases such as: the subway gunman  Bernhard Goetz;  the subway token booth clerk James Grimes; the Candyman Good Samaritan Andy Fredericks; the black Bernie Goetz Austin Week, and the accused remember me subway shooter Clemente Jackson. Roy Innis is a nationally known advocate of 2nd Amendment Rights.  Some of his activities include: investigating and exposing the Tawana Brawley hoax; overseeing and participating in a citizen’s anti-drug campaign One Street At A Time; championing the rights of immigrants; fighting against public indecency and predatory crime in an all-out effort to clean up New York’s crime-ridden streets and subway system. Innis is currently pioneering a multifaceted on-the-job training program for welfare mothers geared to reducing the ,100,000 welfare roll in New York City.

While colleagues (friends and foes) consider some of his ideas to be controversial, Innis bases his positions always on the sound principles of "truth, logic and courage." Faithful to this principle, in the 1993 New Your City mayoral primary, Innis challenged incumbent David Dinkins, the first black person to hold that office. His mayoral campaign was the most cost- effective and productive in the history of NY City.  He was competitive in over one half of the city’s voting districts, winning a borough and 14 Assembly Districts outright. The mayor outspent Innis by over 40 to 1.

Innis led teams of prominent Americans to Nigeria in 1996, 1997 and 1998 to monitor the elections which were part of the transition process from military to civilian rule. He also filed election monitoring reports to both the U.S. Congress and to President Clinton. He visited Liberia to assess events during and after the inauguration of President Charles W. Taylor. He visited Sierra Leone to assess recent conditions with ECOMOG troops.