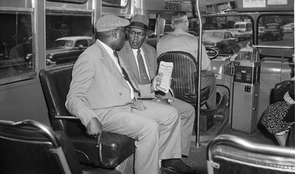 Browder v. Gayle, 142 F. Supp. 707, was a case heard before the U.S. District Court for the Middle District of Alabama regarding Montgomery bus segregation laws.

Case history
Right after the commencement of the Montgomery Bus Boycott in December 1955, black community leaders began discourse on the need for a federal lawsuit to challenge City of Montgomery and Alabama bus segregation laws. They sought a declaratory judgment that Alabama state statutes and ordinances of the Montgomery providing for and enforcing racial segregation on "privately" operated buses abridged the privileges and immunities of plaintiffs and denied them equal protection of the laws under the Fourteenth Amendment and the rights guaranteed them by Sections 1981 and 1983 of the Civil Rights Act. This case came before a three-judge court under the authority of 28 U.S.C., § 2281, and 28 U.S.C., §§ 1331 and 1343. A three-judge district court is required under § 2281 for the granting of an interlocutory, or permanent injunction restraining the enforcement of a state statute by restraining the action of a state officer, such as an official of the Alabama Public Service Commission. The court held that given the admission of city officials that they were enforcing state statutes, a three judge court had jurisdiction over the case.

About two months after the bus boycott began, Claudette Colvin, a 15-year old's case was re-considered by black legal leaders. Attorneys Fred Gray, E.D. Nixon and Clifford Durr (a white lawyer and his wife, Virginia, who were activists in the civil rights movement) searched for the ideal case law to challenge the constitutional legitimacy of Montgomery and Alabama bus segregation laws. Durr believed that an appeal of Mrs. Rosa Parks' case would just get tied up in the Alabama state courts. Gray researched for the law suit, consulting with NAACP legal counsels Robert Carter and Thurgood Marshall (who would later become United States solicitor general and a United States Supreme Court justice). Gray approached Aurelia Browder, Susie McDonald, Claudette Colvin and Mary Louise Smith, all women who had been mistreated by the Montgomery bus system. They all agreed to become plaintiffs in a civil action law suit. On February 1, 1956, case Browder v. Gayle (Browder was a Montgomery housewife; Gayle was the mayor of Montgomery) was filed in U.S. District Court by Fred Gray. It was Browder v. Gayle that caused segregation on Montgomery public buses to be eradicated.
Find our Education featured page as a Las Vegas, NV Business in the Las Vegas Valley Directory.
Location: Las Vegas, NV, United States | Phone: (702) 637-7968