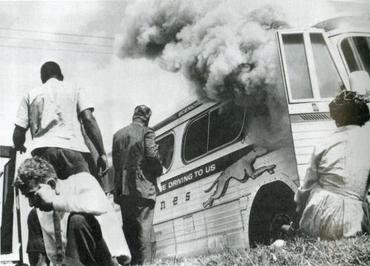 Freedom Summer was a highly publicized campaign in the Deep South to register blacks to vote during the summer of 1964.

During the summer of 1964, thousands of civil rights activists, many of them white college students from the North, descended on Mississippi and other Southern states to try to end the long-time political disenfranchisement of African Americans in the region. Although black men had won the right to vote in 1870, thanks to the Fifteenth Amendment, for the next 100 years many were unable to exercise that right. White local and state officials systematically kept blacks from voting through formal methods, such as poll taxes and literacy tests, and through cruder methods of fear and intimidation, which included beatings and lynchings. The inability to vote was only one of many problems blacks encountered in the racist society around them, but the civil-rights officials who decided to zero in on voter registration understood its crucial significance as well the white supremacists did. An African American voting bloc would be able to effect social and political change.

Freedom Summer marked the climax of intensive voter-registration activities in the South that had started in 1961. Organizers chose to focus their efforts on Mississippi because of the state's particularly dismal voting-rights record: in 1962 only 6.7 percent of African Americans in the state were registered to vote, the lowest percentage in the country. The Freedom Summer campaign was organized by a coalition called the Mississippi Council of Federated Organizations, which was led by the Congress of Racial Equality (CORE), and included the National Association for the Advancement of Colored People (NAACP), and the Student Nonviolent Coordinating Committee (SNCC). By mobilizing volunteer white college students from the North to join them, the coalition scored a major public relations coup as hundreds of reporters came to Mississippi from around the country to cover the voter-registration campaign.

The organization of the Mississippi Freedom Party (MFDP) was a major focus of the summer program. More than 80,000 Mississippians joined the new party, which elected a slate of sixty-eight delegates to the national Democratic Party convention in Atlantic City. The MFDP delegation challenged the seating of the delegates representing Mississippi's all white Democratic Party. While the effort failed, it drew national attention, particularly through the dramatic televised appeal of MFDP delegate Fannie Lou Hamer. The MFDP challenge also lead to a ban on racially discriminatory delegations at future conventions.

Freedom Summer officials also established 30 "Freedom Schools" in towns throughout Mississippi to address the racial inequalities in Mississippi's educational system. Mississippi's black schools were invariably poorly funded, and teachers had to use hand-me-down textbooks that offered a racist slant on American history. Many of the white college students were assigned to teach in these schools, whose curriculum included black history, the philosophy of the Civil Rights Movement, and leadership development in addition to remedial instruction in reading and arithmetic. The Freedom Schools had hoped to draw at least 1000 students that first summer, and ended up with 3000. The schools became a model for future social programs like Head Start, as well as alternative educational institutions.

Freedom Summer activists faced threats and harassment throughout the campaign, not only from white supremacist groups, but from local residents and police. Freedom School buildings and the volunteers' homes were frequent targets; 37 black churches and 30 black homes and businesses were firebombed or burned during that summer, and the cases often went unsolved. More than 1000 black and white volunteers were arrested, and at least 80 were beaten by white mobs or racist police officers. But the summer's most infamous act of violence was the murder of three young civil rights workers, a black volunteer, James Chaney, and his white coworkers, Andrew Goodman and Michael Schwerner. On June 21, Chaney, Goodman and Schwerner set out to investigate a church bombing near Philadelphia, Mississippi, but were arrested that afternoon and held for several hours on alleged traffic violations. Their release from jail was the last time they were seen alive before their badly decomposed bodies were discovered under a nearby dam six weeks later. Goodman and Schwerner had died from single gunshot wounds to the chest, and Chaney from a savage beating.

The murders made headlines all over the country, and provoked an outpouring of national support for the Civil Rights Movement. But many black volunteers realized that because two of the victims were white, these murders were attracting much more attention than previous attacks in which the victims had been all black, and this added to the growing resentment they had already begun to feel towards the white volunteers. There was growing dissension within the ranks over charges of white paternalism and elitism. Black volunteers complained that the whites seemed to think they had a natural claim on leadership roles, and that they treated the rural blacks as though they were ignorant. There was also increasing hostility from both black and white workers over the interracial romances that developed the summer. Meanwhile, women volunteers of both races were charging both the black and white men with sexist behavior.

But despite the internal divisions, Freedom Summer left a positive legacy. The well-publicized voter registration drives brought national attention to the subject of black disenfranchisement, and this eventually led to the 1965 Voting Rights Act, federal legislation that among other things outlawed the tactics Southern states had used to prevent blacks from voting. Freedom Summer also instilled among African Americans a new consciousness and a new confidence in political action. As Fannie Lou Hamer later said, "Before the 1964 project there were people that wanted change, but they hadn't dared to come out. After 1964 people began moving. To me it's one of the greatest things that ever happened in Mississippi."
Find our Education featured page as a Las Vegas, NV Business in the Las Vegas Valley Directory.
Location: Las Vegas, NV, United States | Phone: (702) 637-7968