Blacks in the South finally get to go to the polls 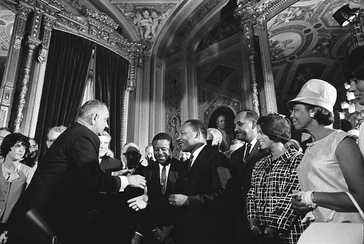 In the century following Reconstruction, African Americans in the South faced overwhelming obstacles to voting. Despite the Fifteenth and Nineteenth Amendments to the U.S. Constitution, which had enfranchised black men and women, southern voter registration boards used poll taxes, literacy tests, and other bureaucratic impediments to deny African Americans their legal rights. Southern blacks also risked harassment, intimidation, economic reprisals, and physical violence when they tried to register or vote. As a result, African Americans had little if any political power, either locally or nationally. In Mississippi, for instance, only five percent of eligible blacks were registered to vote in 1960.

The Voting Rights Act of 1965,  grew out of both public protest and private political negotiation. Starting in 1961, CORE joined SCLC in staging nonviolent demonstrations in Georgia, and Birmingham. They hoped to attract national media attention and pressure the U.S. government to protect Black's constitutional rights. Newspaper photos and TV broadcasts of Birmingham's racist police commissioner, Eugene "Bull" Connor, and his men violently attacking the protesters with water hoses, police dogs, and nightsticks awakened the consciences of whites.

Selma, Alabama was the site of the next campaign. In the first three months  of 1965, Local residents and visiting volunteers held a series of marches demanding an equal right to vote. As in Birmingham, they met with violence and imprisonment.  In the worst attack yet, on Sunday, March 7, a group of Alabama state troopers, local sheriff's officers, and unofficial posse men used tear gas and clubs against 600 peaceful marchers. By now, the nation was watching.

President Lyndon B. Johnson made civil rights one of his administration's top priorities, using his formidable political skills to pass the Twenty-Fourth Amendment, which outlawed poll taxes, in 1964. Now, a week after "Bloody Sunday" in Selma, Johnson gave a televised speech before Congress in which he denounced the assault. Two days later, the President sent the Voting Rights bill to Congress.

The resolution, signed into law on August 6, 1965, empowered the federal government to oversee voter registration and elections in counties that had used tests to determine voter eligibility or where registration or turnout had been less than 50 percent in the 1964 presidential election. It also banned discriminatory literacy tests and expanded voting rights for non-English speaking Americans.

The law's effects were wide and powerful. By 1968, nearly 60 percent of eligible African Americans were registered to vote in Mississippi, and other southern states showed similar improvement. Between 1965 and 1990, the number of black state legislators and members of Congress rose from two to 160.

The Voting Rights Act was extended in 1970, 1975, and 1982. Some key provisions are scheduled to expire in 2007. Despite some setbacks and debates, the Voting Rights Act had an enormous impact. It re-enfranchised black southerners, helping elect African Americans at the local, state, and national levels.
Find our Education featured page as a Las Vegas, NV Business in the Las Vegas Valley Directory.
Location: Las Vegas, NV, United States | Phone: (702) 637-7968