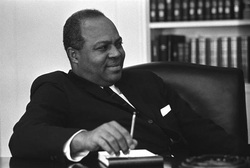 Born in Marshall, Texas, Farmer was an educator, administrator, and one of the founders of the Congress of Racial Equality-CORE.

Raised in an environment that valued education and religious faith, James Farmer was an outstanding student. After skipping several grades in elementary school, he entered Wiley College in Marshall, Texas at the age of 14 (where his father had taught and was one of the few African American Ph.D.s in the South). A principal on Wiley's national champion debate team, he graduated in 1938 and went on to study at Howard University's School of Religion. He graduated from Howard in 1941. Farmer opposed war in general, and more specifically objected to serving in the segregated Armed Forces. When the U.S. entered World War II later that year, he applied for conscientious objector status but found he was deferred from the draft because he had a divinity degree. Read more about James Farmer 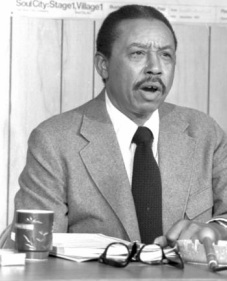 Born in Asheville, North Carolina on March 9, 1922, McKissick did his undergraduate work at Morehouse and North Caroline colleges, and later graduated from the University of North Carolina Law School.
During World War II McKissick served in the European Theater as a sergeant. After the war, he began legal practice in Durham, North Caroline, where he once represented his own daughter in her successful bid to gain admission to a previously all-white public school.

Despite the victory, McKissick later decided that "integration" itself only magnified the perils faced by many black children, McKissick bitterly recalled that his children had been taunted and harassed: "Patches cut out of their hair, pages torn out of books, water thrown on them in the dead of winter, ink down the front of their dresses," a demoralizing array of constant and relentless pressures designed to crack their composure and destroy their will to learn. The adversity no doubt deepened McKissick’s nascent radicalism and militant zeal.

As a lawyer, McKissick’s most publicized efforts involved a segregated black local in the Tobacco Workers International, an AFL-CIO member. McKissick pressed to have black workers admitted to the skilled scale without loss of their seniority rating. McKissick also successfully defended "sit-in" protestors in the South. Read more about Floyd B. McKissick

Served as National Chairman, Congress of Racial Equality (CORE) from June, 1968 to May 1969. He was the Chairman of San Francisco CORE.

President, Black Urban Systems, a consulting firm that advises Black communities on acquiring control of institutions, services, and resources generated within their environs. 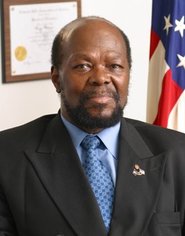 Roy Innis was born in St. Croix, U.S. Virgin Islands, the second of nine children. His father died when he was six years old, and at the age of twelve, his widowed mother moved the family  to Harlem. At the age of 16, young Innis raised his age and joined the Army.  By seventeen, he had attained the rank of sergeant.  Completing his tour of duty, Innis retired from the Army at the age of eighteen.  He had attended Stuyvesant High School, and upon returning to New York City, took a high school equivalent examination and began a four-year program in chemistry at  the City College of New York.  Upon leaving college, Innis worked for a number of years for various chemical companies and medical agencies, most notably Vick Chemical Company and Montefiore Hospital, where, as the sole researcher for an important cardiovascular research project, he achieved an important break-through in this area which resulted in the publicaton of a paper jointly authored by him and the head of the project.

Innis joined CORE’s Harlem Chapter in 1963. In 1964, he was elected Chairman of the Chapter’s Education Committee and became a forceful advocate of community-controlled education.  He led CORE’s fight for an independent Police Review Board to address cases of police brutality. In 1965, he was elected Chairman of Harlem CORE, after which he mounted a vigorous campaign for establishment of an independent Board of Education for Harlem. A proposition to this end was presented to the 1967 New York State Constitutional Convention.   Read more about Roy Innis
Find our Education featured page as a Las Vegas, NV Business in the Las Vegas Valley Directory.
Location: Las Vegas, NV, United States | Phone: (702) 637-7968