Brown vs. Board of Education

The Case that Ended Segregation of Public Schools 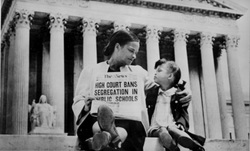 Brown v. Board of Education of Topeka, 347 U.S. 483 (1954), was a landmark decision of the United States Supreme Court, which declared that separate public schools for black and white students denied black children equal educational opportunities, paving the way for integration and the civil rights movement.

Case history
In 1951, a class action suit was filed against the Board of Education of the City of Topeka, Kansas in the U.S. District Court for the District of Kansas. The plaintiffs were thirteen Topeka parents on behalf of their twenty children. The suit called for the school district to reverse its policy of racial segregation. Separate elementary schools were operated by the Topeka Board of Education under an 1879 Kansas law, which permitted (but did not require) districts to maintain separate elementary school facilities for black and white students in twelve communities with populations over 15,000.

The named plaintiff, Oliver L. Brown, was a parent, a welder in the shops of the Santa Fe Railroad, an assistant pastor at his local church, and an African American. Brown's daughter Linda, a third grader, had to walk six blocks to her school bus stop to ride to Monroe Elementary, her segregated black school one mile away, while Sumner Elementary, a white school, was seven blocks from her house. The parents each attempted to enroll their children in the closest neighborhood school in the fall of 1951. They were each refused enrollment and directed to the segregated schools. With advice of the NAACP, the parents filed suit.

The District Court ruled in favor of the Board of Education, citing the U.S. Supreme Court precedent set in Plessy v. Ferguson, 163 U.S. 537 (1896), which had upheld a state law requiring "separate but equal" segregated facilities for blacks and whites in railway cars. The three-judge District Court found that segregation in public education has a detrimental effect upon negro children, but denied relief on the ground that the negro and white schools in Topeka were substantially equal with respect to buildings, transportation, curricular, and educational qualifications of teachers. The plaintiffs appealed, and the case went before the United States Supreme Court.

The case of Brown v. Board of Education as heard before the Supreme Court combined five cases: Brownitself, Briggs v. Elliott (filed in South Carolina), Davis v. County School Board of Prince Edward County (filed in Virginia), Gebhart v. Belton (filed in Delaware), andBolling v. Sharpe (filed in Washington D.C.). All were NAACP-sponsored cases. The NAACP's chief counsel, Thurgood Marshall — who was later appointed to the U.S. Supreme Court (1967) — argued the case before the Supreme Court for the plaintiffs.

Handed down on May 17, 1954, the high Court's unanimous (9-0) decision stated that "separate educational facilities are inherently unequal." As a result, laws allowing racial segregation were ruled a violation of the Equal Protection Clause of the Fourteenth Amendment of the United States Constitution. This victory paved the way for integration and the civil rights movement.