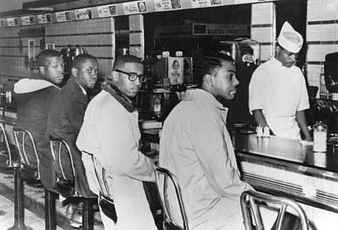 On February 5, 1960, four black college students sat down at a 'white-only' department store lunch counter in Greensboro, North Carolina. This Woolworth's counter was but one of the many segregated public facilities in the American South where blacks were prohibited from such activities as eating, swimming, and drinking by whites who not only opposed equal treatment of the races, but feared any possibility of bodily contact. When the restaurant refused these students service, they remained seated until the store closed for the evening. The students returned each morning for the next five days to occupy the lunch counter, joined by a group of protesters that grew to the hundreds. Faced by a mob of angry white residents and management that refused to serve them a cup of coffee, the students maintained their protest until they forced the store to close its doors.

The protest by Joseph McNeil, Ezell Blair Jr., Franklin McCain and David Richmand marked the beginning of a grassroots sit-in movement led by CORE against the segregated public spaces of the South. Black or racially integrated students and CORE organizers would sit down in white-only spaces and refuse to move until they were served or forcibly removed. By the end of 1960, about 70,000 Black students had participated in a sit-in or marched in support of the demonstrators.

Although there had been a few sit-in protests before 1960, including two in 1943, the mass mobilization of 1960 was new. Few in the economically struggling black community of the South had been willing to undertake these types of direct action protests, since they would be in danger of losing their jobs after an arrest. CORE organized Black students since generally they had fewer financial responsibilities than their older counterparts and they were interested in forcing change more immediate than that promised by the legal reform advocates.

In 1960, through CORE's "Sit-ins," black students entered the political arena in large numbers for the first time. The character of the civil rights protesting began to change. Influenced by the success of CORE protests, black students saw the potential for using nonviolent resistance to undermine the system and the thinking of segregation.

The pivotal demonstration was the Greensboro sit-in. But CORE had already begun organizing elsewhere. During 1960, sit-ins began to break down the segregation of the upper South, and lunch counters were integrated in cities in Texas, North Carolina, Tennessee. The reasons for integration were economic as well as moral. Boycotters, both black and white, supported the protesters, and many merchants did not want to lose the revenue of customers.

The efficacy of nonviolent resistance was one of the most important legacies of the 1960 sit-in protests. Segregation was seen to be a moral, as well as a legal issue, and the dignity of blacks in the face of white supremacist rage went far to win white and black support for the movement.
Find our Education featured page as a Las Vegas, NV Business in the Las Vegas Valley Directory.
Location: Las Vegas, NV, United States | Phone: (702) 637-7968