George Houser, the son of a Methodist Minister, became a pacifist while studying at the Theological Seminary in Chicago. Houser was influenced by Henry David Thoreau and his theories on how to use nonviolent resistance to achieve social change. Houser joined the Fellowship of Reconciliation (FOR) and the War Resisters League and in November, 1940, he was arrested for resisting the draft. Found guilty, he was sentenced to a year imprisonment in Danbury, Connecticut.

On his release from prison Houser became Youth Secretary of Fellowship of Reconciliation. He worked closely with Abraham Muste, the leader of the organization. Houser also helped Muste and Philip Randolph to organize the planned March on Washington in June, 1941 against racial discrimination in the armed forces. The demonstration was called off when Franklin D. Roosevelt issued Executive Order 8802 on 25th June, 1941, barring discrimination in defense industries and federal bureaus (the Fair Employment Act.

In 1942 Houser, and two other members of FOR, James Farmer and Bayard Rustin, established the Congress on Racial Equality (CORE). Members of CORE had been deeply influenced by the teachings of Mahatma Gandhi and the nonviolent civil disobedience campaign that he used successfully against British rule in India. The students became convinced that the same methods could be employed by African Americans to obtain civil rights in America.

In early 1947, the Congress on Racial Equality announced plans to send eight white and eight black men into the Deep South to test the Supreme Court ruling that declared segregation in interstate travel unconstitutional. Organized by Houser and Bayard Rustin, the Journey of Reconciliation was to be a two week pilgrimage through Virginia, North Carolina, Tennessee and Kentucky. 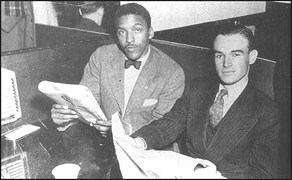 Although Walter White of the National Association for the Advancement of Colored People (NAACP) was against this kind of direct action, he volunteered the service of its southern attorneys during the campaign. Thurgood Marshall, head of the NAACP's legal department, was strongly against the Journey of Reconciliation and warned that a "disobedience movement on the part of Negroes and their white allies, if employed in the South, would result in wholesale slaughter with no good achieved."

The Journey of Reconciliation began on 9th April, 1947. As well as Houser, the team included Bayard Rustin, James Peck, Igal Roodenko, Nathan Wright, Conrad Lynn, Wallace Nelson, Andrew Johnson, Eugene Stanley, Dennis Banks, William Worthy, Louis Adams, Joseph Felmet, Worth Randle and Homer Jack.
Members of the Journey of Reconciliation team were arrested several times. In North Carolina, two of the African Americans, Bayard Rustin and Andrew Johnson, were found guilty of violating the State's Jim Crow bus statute and were sentenced to thirty days on a chain gang. However, Judge Henry Whitfield made it clear he found that behavior of the white men even more objectionable. He told Igal Roodenko and Joseph Felmet: "It's about time you Jews from New York learned that you can't come down here bringing your niggers with you to upset the customs of the South. Just to teach you a lesson, I gave your black boys thirty days, and I give you ninety."

The Journey of Reconciliation achieved a great deal of publicity and was the start of a long campaign of direct action by the Congress on Racial Equality. In February 1948 the Council Against Intolerance in America gave Houser and Bayard Rustin the Thomas Jefferson Award for the Advancement of Democracy for their attempts to bring an end to segregation in interstate travel.

1. In the journal, Equality, George Houser explained his views on non-violence (May, 1945)

A person trying to practice non-violence will refuse to retaliate violently. He merely absorbs the physical punishment. This sounds crazy to the average person, who has been taught to protect himself by retaliating when attacked, even if he does take a beating in the process. Why, then, is non-retaliation essential to the non-violent approach? From the negative standpoint, if non-violence is forsaken by the minority group it means the police can be called to arrest them. From the positive point of view, non-retaliatory action may make possible the winning of the support of the public, of the police, and of the opposition.

2.Instructions produced by George Houser and Bayard Rustin for the Journey of Reconciliation  (April, 1947)

If you are a Negro, sit in a front seat. If you are white, sit in a rear seat.
If the driver asks you to move, tell him calmly and courteously: "As an interstate passenger I have a right to sit anywhere in this bus. This is the law as laid down by the United States Supreme Court".
If the driver summons the police and repeats his order in their presence, tell him exactly what you said when he first asked you to move.

If the police ask you to "come along," without putting you under arrest, tell them you will not go until you are put under arrest.

If the police put you under arrest, go with them peacefully. At the police station, phone the nearest headquarters of the NAACP, or one of your lawyers. They will assist you.

On June 3, 1946, the Supreme Court of the United States announced its decision in the case of Irene Morgan versus the Commonwealth of Virginia. State laws demanding segregation of interstate passengers on motor carriers are now unconstitutional for segregation of passengers crossing state lines was declared an "undue burden on interstate commerce." Thus it was decided that state Jim Crow laws do not affect interstate travelers. In a later decision in the Court of Appeals for the District of Columbia, the Morgan decision was interpreted to apply to interstate train travel as well as bus travel.

The executive committee of the Congress of Racial Equality and the racial-industrial committee of the Fellowship of Reconciliation decided that they should jointly sponsor a "Journey of Reconciliation" through the upper South, in order to determine to how great an extent bus and train companies were recognizing the Morgan decision. They also wished to learn the reaction of bus drivers, passengers, and police to those who nonviolently and persistently challenge Jim Crow in interstate travel.

White George Houser, of the FOR and executive secretary of the Congress of Racial Equality; Ernest Bromley, Methodist minister from North Carolina; James Peck, editor of the Workers Defense League News Bulletin; Igal Roodenko, New York horticulturist; Worth Randle, Cincinnati biologist; Joseph Felmet, of the Southern Workers Defense League; Homer Jack, executive secretary of the Chicago Council Against Racial and Religious Discrimination; Louis Adams, Methodist minister from North Carolina. During the two weeks of the trip, twenty-six tests of company policies were made. Arrests occurred on six occasions, with a total of twelve men arrested.

4.George Houser, interviewed by Jervis Anderson for his book, A. Philip Randolph: A Biographical Portrait (1972)

We  in the non-violent movement of the 1940s certainly thought that we were initiating something of importance in American life. Of course, we weren't able to put it in perspective then. But we were filled with vim and vigor, and we hoped that a mass movement could develop, even if we did not think that we were going to produce it. In retrospect, I would say we were precursors. The things we did in the 1940s were the same things that ushered the civil rights revolution. Our Journey of Reconciliation preceded the Freedom Rides of 1961 by fourteen years. Conditions were not quite ready for the full-blown movement when we were undertaking our initial actions. But I think we helped to lay the foundations for what followed, and I feel proud of that.

My introduction to the African liberation struggle began with the "Campaign to Defy Unjust Laws," sponsored by the African National Congress. The year was 1952. Word about plans for the forthcoming massive nonviolent Defiance Campaign to resist the apartheid laws came to me from my friend and co-worker Bill Sutherland through a South African editor whom he had met in London. Sutherland and I were both pacifists, and had worked together on numerous projects to combat segregation in the United States by non-violent methods.
Find our Education featured page as a Las Vegas, NV Business in the Las Vegas Valley Directory.
Location: Las Vegas, NV, United States | Phone: (702) 637-7968