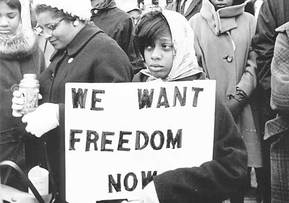 Civil Rights Act of 1964
The Civil Rights Act of 1964 (Pub.L. 88-352, 78 Stat. 241, July 2, 1964) was a landmark piece of legislation in the United States that outlawed racial segregation in schools, public places, and employment. Conceived to help African Americans, the bill was amended prior to passage to protect women, and explicitly included white people for the first time. It also created the Equal Employment Opportunity Commission

Civil Rights Act of 1964
The National Voting Rights Act of 1965 (42 U.S.C.disenfranchisement of African Americans in the United States. Echoing the language of the 15th Amendment, the Act prohibited states from imposing any "voting qualification or prerequisite to voting, or standard, practice, or procedure ... to deny or abridge the right of any citizen of the United States to vote on account of race or color." Specifically, Congress intended the Act to outlaw the practice of requiring otherwise qualified voters to pass literacy tests in order to register to vote, a principal means by which southern states had prevented African-Americans from exercising the franchise.  § 1973–1973aa-6)[1] outlawed discriminatory voting practices that had been responsible for the widespread
Find our Education featured page as a Las Vegas, NV Business in the Las Vegas Valley Directory.
Location: Las Vegas, NV, United States | Phone: (702) 637-7968